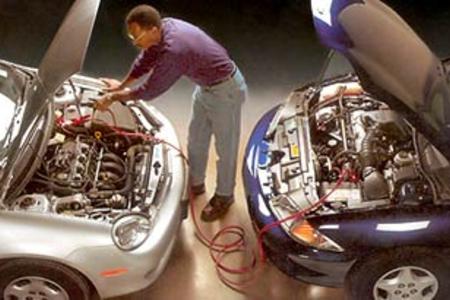 3. Determine which terminals are positive and negative on both batteries. Look for "+" sign or red indicator for positive, "-" sign or black indicator for negative. The positive terminal is usually wider than the negative.

Caution: Once you begin the next steps, do not touch the metal portion of the jumper cable clamps to each other or any part of the car except the proper battery terminal.

YOUR CABLES ARE NOW LIVE! DO NOT TOUCH THE REMAINING CABLE CLAMP METAL PORTION TO YOURSELF OR ANY PART OF THE CAR EXCEPT THE NEGATIVE TERMINAL OF THE DEAD BATTERY.

7. Attach the other end of the negative cable to a metal section (bracket, block, etc.) of the engine away from any moving parts (CAUTION: belts and pulleys can be dangerous). Connecting this cable last, and away from the battery, will avoid sparks and potential hazards at the battery.

8. Make certain everyone is clear of the engine compartments - don't allow hands or clothing to be caught by moving engine parts.

9. Start the engine of the good car. Allow it to run for 1-2 minutes. Rev the engine slightly by pressing on the gas pedal lightly.

10. Start the engine of the dead car. It may take more than one try, but do not try to restart it more than three or four times.

If the dead car gets no "click" when you turn the key, the booster cables may not have a good connection at the terminals. Turn off the engine and try rocking the cable clamps back and forth to get the clamps to dig into the terminals. Or, try another ground point to attach the negative cables. Retry from step 7. If the engine still won't start, allow the good car to run for 5-10minutes while hooked up to the dead car. Rev the engine slightly. This may build a charge in the dead battery and allow you to restart. If these steps do not work after three or four more tries, stop trying to jump-start. The battery may be shorted internally, or the dead car may have other electrical problems besides the battery. Continuing to try the jump-start can cause damage to the electrical system.

Everything you need to know to do just that!

Jump-Starting Your Battery Using Another Car